I've read a fair bit of negative chit-chat on lists and forums regarding Pentax flashes, so here's just a bit of positive news: once a Pentax AF540-FGZ flash is repaired, it works well and hard.

A few months ago I blew up one of my two 540's, for the 2nd time. This time time I learned the hard way that if you have it powered on while inserting it into a metal cold shoe and you manage to short the contacts, it will try to fire multiple times rapidly and expires in the attempt. I left it out of my kit for quite a while until one day I realized I'd need it for an outdoor shoot I was to be part of.

I drove it over to Pentax Canada, they fixed it, charged me 200 bills (ouch!) and I drove it home a week later.

It didn't work! Same symptoms: faint ticking sound inside, the red charged light never comes on. So I contacted Pentax, the service manager apologized and asked me to try a few tests, failing which to bring it in. So I did, drove it over again (now my car knows the way), and the tech proceeded to demonstrate it working perfectly on his K-5 body. Aaaargh!

But I left it with them for observation, they ran all the tests they could think of and called me to pick it up a few days later. This time I brought fresh batteries with me and tested it in the lobby before accepting it. Drove it home, fired it up ... and it worked fine. And 100% fine ever since.

Last Thursday I did a creative fashion shoot using an Elinchrom softbox feathered to light the model's fronts and my two 540's lighting up the background (rough, unpainted concrete) with two coloured gels from a good distance back left & right of the models. I fired those suckers over 500 times, at full power, including a fresh battery change, over about 4 hours. When we finally wrapped and I got them down off their stands, the flashes were very warm and the batteries were hot to the touch.

So, summary: AF540's may be electrically a bit fragile, and kinda pricey, but they are friggen' workhorses, and will stand up to heavy use. They lit up a concrete wall 12 feet high over an area at least 12 feet across, bright enough to be seen nicely at f/8, ISO 100.

Here's one of my proof of concept lighting shots: 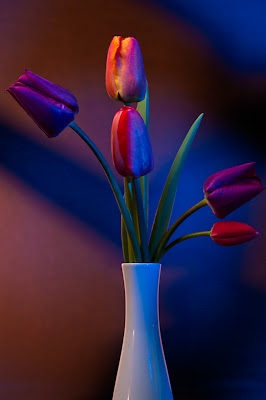 It's the "Accidental Tulips" setup with a feathered softbox, then the black foamcore background was lit from right and left by gelled, snooted (or gridded) and gobo'ed AF540-FGZ flashes. The criss-crossing shadows create the cool coloured patterns.